How to make a Minion Melon 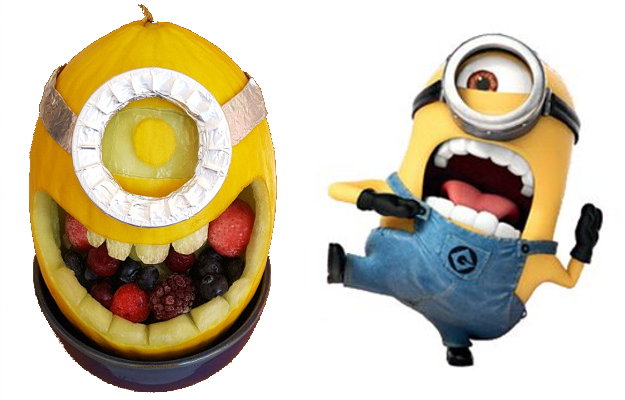 There’s nothing quite like having a bit of fun in the kitchen, and getting your 5 a day out of it at the same time.

Bean loves melon, and who doesn’t love a Minion?

This how to make a Minion melon project is an opportunity to do something together, while at the same time stepping back and letting the little one take the lead. It’s hard, I’ll admit.

Before we started I had a pretty good idea of what was needed – but letting her make some of the decisions will help grow her confidence, allow her to learn from any mistakes, and allow me to learn that just because I’m a “grown up” (that’s up for debate I think) I don’t know all the answers either and often her imagination and ideas are much better than mine!

What you need to make a Minion melon

We started by sketching out some mouth shapes on paper – Bean and I looked online for some pictures of minions and chose a mouth with a large opening so we could get the melon out – and the fruit in – easily.

Bean drew some sketches and we looked them over together, decided which ones were best and she chose the winning one. 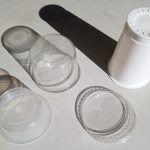 Because I still hoard plastic containers for no better reason than “just in case”, we had a look through the stash and picked out a few that looked like they could make good goggles. With some persuasion from me we chose the white cup, cut to size and covered in foil because of the detail on the base – it looked similar to the goggles we’d seen online.

We (I) cut the cup to size and cut the hole in the base, tore off a piece of tin foil about the right size and had Bean wrap it snugly.

I showed her how to get the detail on the cup to show through by gently smoothing between and over the ridges with her finger, I then cut a star in the centre and asked her to finish wrapping.

Once we’d done this we held it against the melon so she could choose the right position. 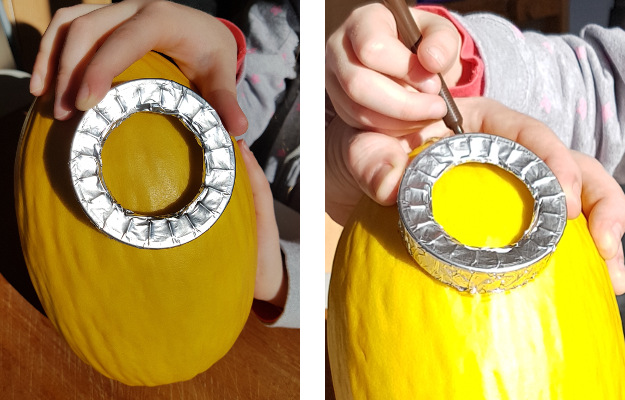 Then, with a little guidance that it should be fairly high so we could have a big mouth below it, we found a good spot for the goggle. I held it in position while Bean drew around it on the melon. I drew in a pupil and some eyelids to show inside the goggle. You can start to imagine what the finished Minion melon will look like!

First, we placed the melon in a blue bowl that was just the right size for it to stand up in and looked enough like dungarees to pass the happy daughter test. Bean drew a mouth on, it took a few goes and while she was a little upset when it wasn’t perfect first time I showed her that we could wipe the pen off with a damp cloth and she could have as many goes as she wanted until she was happy. 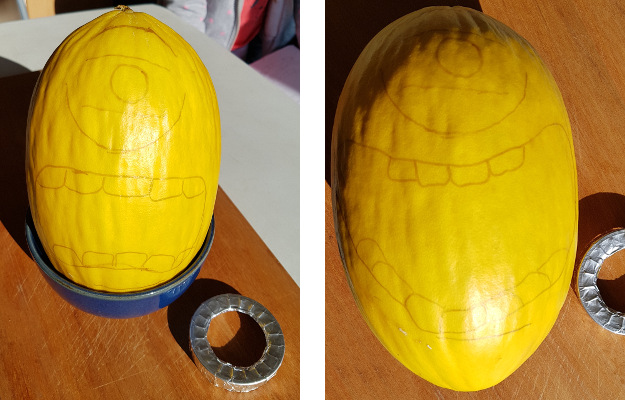 This is so important – because she’s getting involved, it’s her design, and it’s ok to make mistakes. Her first attempts had the mouth pretty small so I drew the one shown in the left picture to give her a size guide. Once she was happy with her design (right) we started cutting.

Using a small knife I cut around the border (inside the teeth) and prised out the melon. I then cut around the inside of the skin at a distance of 5-10mm and a grid pattern into the flesh so Bean could scoop it and the seeds out.

I scored along the outline of the teeth with the knife just deep enough to break the skin, then used it to peel the skin away. From here, I shaped the teeth by cutting the gaps between them and slightly rounding corners with direction and feedback from Bean at every step. 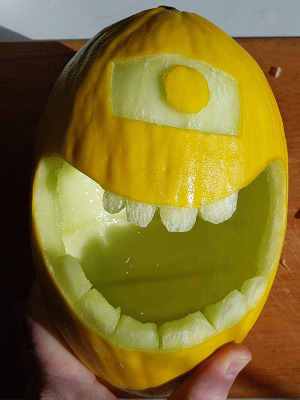 Next was the scoring and peeling for the eye. If I were to make a Minion melon again, I’d position the pupil slightly lower and also colour it in with a food pen after.

We didn’t have any suitable black paper, material or elastic to create the headband, so Bean folded a sheet of tinfoil to a suitable looking width, sellotaped it to the ‘lens’ and popped it on top of our Minion.

To hold it in place, I gently pinched the top of the foil band together at the back so it followed the curvature of the melon and gave a snug fit. Don’t pinch too hard or it’ll tear – but if it does, make another one! 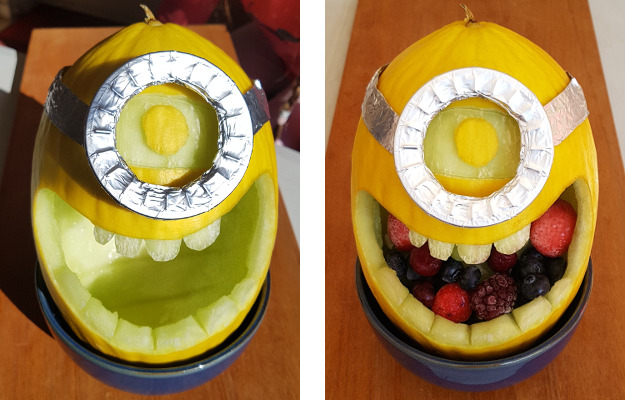 We added some frozen mixed red berries – because that’s what we had – and a few grapes. Minions love bananas of course, and had we had some mini/lunchbox sized ones the scale would have been perfect! Ours weren’t, so we’ll save those for another food craft day.

By this time, Bean had eaten most of the melon she’d scooped out so with our Minion done we took a trip to the beach to do some beachcombing with Grandma and saved the rest for dessert after dinner.

Some other alternatives or additions would include the hair – some black liquorice or twizzlers would have worked well, but Bean was happy enough with the stalk as the single hair, so that’s how it stayed.

There are of course plenty of other things you could carve from a melon – watch this space for our efforts at Pirate Ships, Sharks, and other ideas.

Now you know how to make a Minion melon and I hope you guys have fun making your own – share your photographs and let everyone know how it went!

N.B. One of the most important things we can do as parents is to allow our children to learn and to grow by providing the environment, opportunity and inspiration for them to do things. Let them try, let them fail, teach them it’s ok to make mistakes and to learn from them. Don’t, please, do it for them. 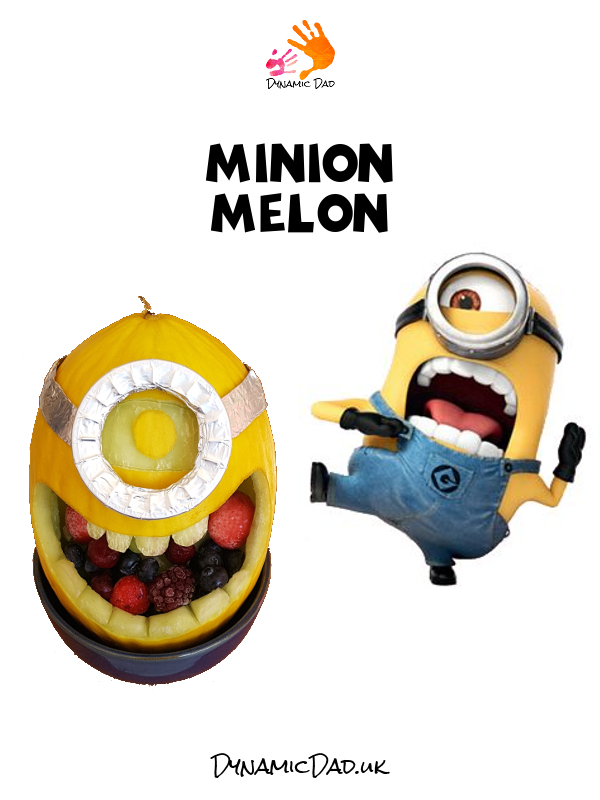